Pompeii is a video slot with five reels, on the screen of which the symbols are arranged in three rows. There are no classic lines, and winning combinations are formed from three (for some pictures - two) or more identical symbols located on adjacent reels, including the first one on the left. In total, pompeii slots provide 243 types of combinations. Payments on them are calculated based on the ratio (up to x1000) and the rate made on the spin. Read about exceptions in the next section. For each round, you can bet 25, 50, 75, 100 or 125 credits in denominations from two cents to one dollar. So playing the Pompeii slot machine is allowed for no more than one hundred twenty-five dollars per round. Pompeii video slot has special characters, free launches and other features. There are no risky gambling games, so the payments received are immediately transferred to the user's account. 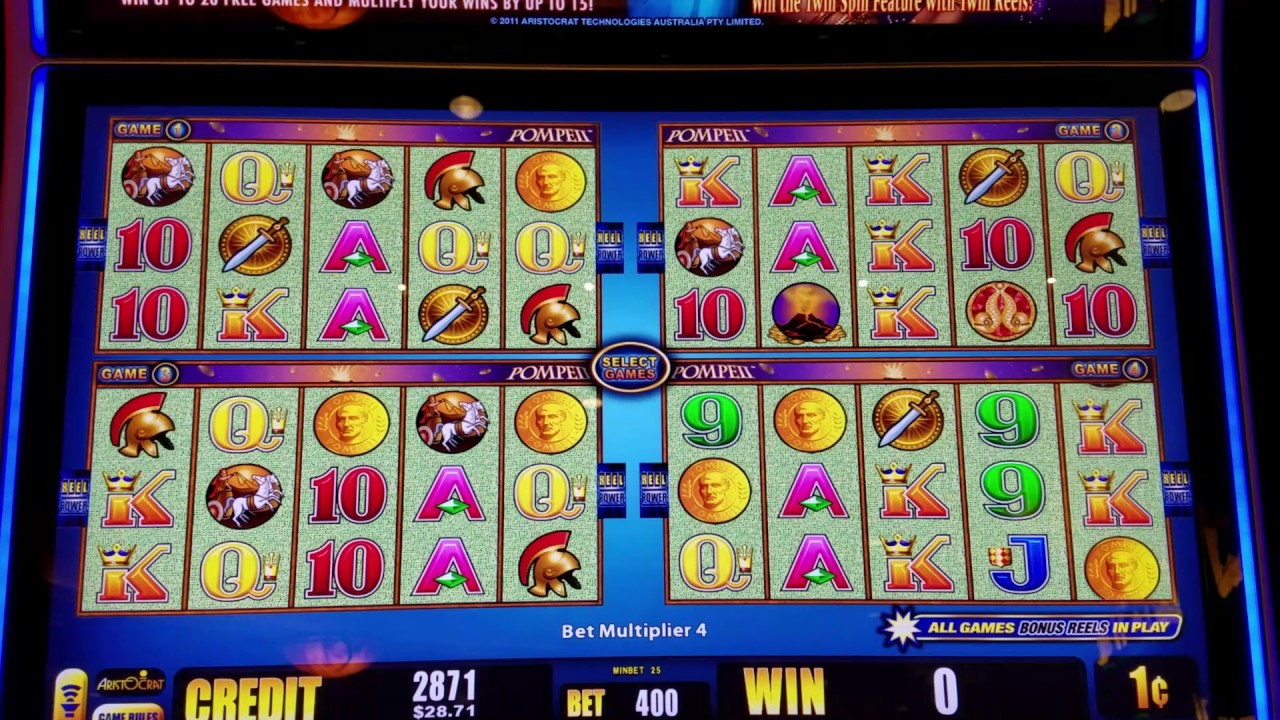 On the reels of the Pompeii gaming machine, you can see images of swords, helmets, chariots and other items related to the ancient Roman civilization. Also here are the designations of denominations of playing cards from nine to ace. There are two special characters in the Pompeii video slot: Wild (erupting volcano Vesuvius) and Bonus (gold coin). Wild appears exclusively on the second and fourth reels and performs only one role - to replace other symbols if necessary. Bonus forms a combination of the general rules. Three or more of these pictures also trigger ten, fifteen or twenty free spins at the current rate. During these rotations, the Wild symbol on the second reel, participating in the combination, multiplies the payout ratio three times. If he appears on the fourth reel and helps to make a combination, then the gain on it will increase five times. Spins can be extended. The combinations in the Glorious Rome slot machine are counted from left to right, starting from the leftmost reel. The sequence must contain at least three images. Winnings are calculated according to the scheme: a linear bet multiplied by the corresponding coefficient. The magnitude of the multiplier depends on the number and type of characters.

Pompeii slot machine offers a concise interface. All control buttons and indicators are located below the reels. Among them:

The bottom information line in the game units states:

To determine the rate, you must either click on the Credit and Bet window, or on the "+" and "-" switches. A large window with two arrows will display a window with the Coins Per Line and Coin Value sectors. The first is setting a line bet. Its value varies from 1 to 10 coins per line with the same keys "+" and "-". Coin Value - determines the cost of democredit. One credit contains from 0.01 to 0.50 game units. The figure is governed by the signs "+" and "-". The minimum rate will be equal to 20 credits, and the maximum - 200.

To start the reels, press the big button with two arrows. Drums scroll 1 time. A square appears on the indicated large button - the Stop sign. Clicking on it, the user will stop the rotation of the reels ahead of time. The second option is Autoplay. If you click on it, a window with a list of values ​​from 10 to 1 000 will appear above the large button. Click any button to start the specified number of autospins. The Stop button will also appear on the large button. If you click on it, the auto mode will end before the end of the programmed turns.

Three or more scatters start Gift round anywhere on the playing field. The slot gives up to 10 free spins, which can be restarted an unlimited number of times. At the beginning of the round, a symbol is randomly selected, which acquires the scatter function during free spins. Payments for it correspond to the values ​​in the payment table.

It is unlikely that the video slot Pompeii will make a strong impression on the experienced players, spoiled by more modern models from leading manufacturers of software for online casinos. Nevertheless, it is quite possible that many will often like combinations that are formed, profitable free spins or some other features of the game. Advantages of the Pompeii slot machine: free spins with an additional special symbol, graphics and musical accompaniment According to gambler reviews, a simple interface makes the gameplay convenient.